It seems that every year Christmas arrives earlier than the year before or is the earth spinning faster on its axis? I am not getting into astronomy as that really is one of my very weak points and I would fail miserably on a quiz show if I were given questions relating to the planets and the galaxies!

Back to Christmas. For many people it is a time for families to get together, but nowadays that is often virtually impossible. With people migrating to other parts of the world and regular airline flights a luxury for some, the festive season can bring with it feelings of sadness, and often loneliness. However, with the availability of social media, WhatsApp calls being available to most, and Facetime or video calls, all is not doom and gloom. One can at least chat to relatives and friends even if they are on the other side of the world. So much better than having to rely on the annual and often tedious catch up letters to find out how people have survived the past year.

There are so many facets to the Christmas season and some of the facts pertaining to this time of year make interesting reading – at least I hope you will find them interesting! Obviously, many of the statements which I make have been derived from various sources and some comments are from personal experience.

Why is Christmas celebrated on 25 December?

Long before the commemoration of the birth of Jesus, pre-Christian celebrations were held in various parts of the world around the time of the winter solstice by Pagan populations who were  apparently later converted to Christianity. As 25 December falls in the darkest days of winter, the celebration was in anticipation of longer and lighter days to come. However, there are those who believe that the angel giving Mary the news that she was to give birth to a son and name him Jesus, occurred on 25 March and therefore, 9 months ahead brings one to 25 December and thus Christmas Day.  Whatever the real reason for Christmas Day falling each year on 25 December, it certainly boosts the retail industry in more ways than one!

What does the word Christmas mean?

Christmas means “mass on Christ’s Day”. The earlier term, “Yule” and the season being referred to as ”Yuletide” may have derived from the Germanic or Anglo-Saxon term which referred to the feast of the Winter Solstice.

Up until the middle of the 1800’s, Christmas was often not celebrated because partying and merrymaking was seen as “un-Christian”.  From about 1840 celebrating Christmas became more widespread, although for the poor it must have just come and gone like any other day of hardship. One only has to read Charles’ Dickens’ “A Christmas Carol” to get some idea of the gap between the haves and the have not’s  in those times.

It seems to be documented that December 25 was declared a federal holiday in the USA in 1870. The Americans are well known for their “Happy Holidays” messages at this time of the year which probably resulted in the “Put Christ back into Christmas”  lobbying,  which was evident several years ago by those who found it rather tasteless to disregard what they believe to be the true meaning of Christmas.  Regardless of one’s belief, Christmastime is a wonderful opportunity to become a child again. Ask any little person what the word Christmas means to them and the answers will surely include words such as presents, father Christmas (or Santa Claus) and holidays as well as Jesus’ birthday – all in all a time for lots of fun and the joy of giving as well as receiving!

Germany is credited with starting the Christmas tree tradition, as we now know it, in the 16th century when devout Christians brought decorated trees into their homes. It appears that when Queen Victoria married her German cousin, Albert, he was homesick and when Christmas came around, he imported a pine tree to Windsor Castle, possibly in 1841. No doubt the ever increasing royal family must have enjoyed having a large, decorated Christmas tree as an annual event.  As is customary with humans, if something is good enough for royalty, then surely it should be emulated, albeit on a less grand scale. Hence, most people in the U.K.  began to feel the need to have even a small, modest tree to decorate at Christmas time.  Even in hot climates where it would be more realistic to decorate one’s home in cool colours, Christmas often means reds, greens, golds – warm tones, despite the heat.

Originally these were only affordable to the wealthy as the first ones cost a shilling each – a huge sum of money in 1843 when they were first produced. It was Sir Henry Cole and his friend, John Horsley, who was an artist, who came up with the idea of designing a Christmas greetings card. The first ones were divided into 3 sections. Two of them depicted people doing good deeds for the poor, whilst the middle section usually showed family groups gathered together for Christmas. Once the price of purchasing such cards became more affordable, they in turn became more popular. Postage costs were also reduced once the railway system was extended, as it was much cheaper to pay to send a card using the train service than the old horse and cart method. 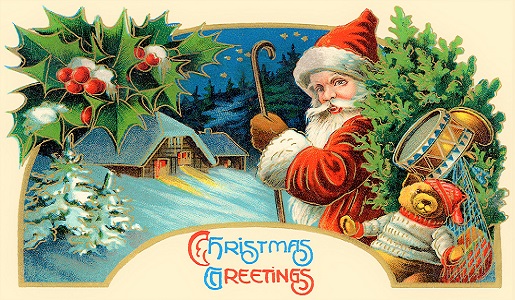 Santa Claus began life as Saint Nicholas, a Turkish bishop, born in 280 AD who was known for his charitable gift giving. Father Christmas has his origins in the Viking custom of feasting, where someone dressed up to represent Old Winter in the hope of favourably influencing the elements. In time the two characters became fused into one.

Apparently, in 1931 Haddon Sundblom was commissioned by the Coca-Cola Company to create the universal Santa Claus of today. Previous illustrations of the symbolic figure were of an elf-like creature. The Coca-Cola advertising concept was created by Archie Lee of the D’Arcy advertising agency and today children all over the world recognise the red bedecked old man with the big white beard as the bearer of wonderful gifts on Christmas morning. Why he has to squeeze down a chimney to deliver all the presents and fill all those stockings is still a mystery for children and parents alike! Plus, all that toy making, and the hours worked by all those totally disadvantaged elves and pixies, working with him day and night in very cold conditions doesn’t bear thinking about. Human rights – does that apply to elves?

I know families who have their own very personal pixie arriving on their rooftop every 1st December and he stays there, invisible to the naked eye, until l 24 December. Every day he gives feedback to Father Christmas on the behaviour of the children living in the house below. It’s amazing just how well behaved a family of kiddies can be when they know that all their naughtiness is being monitored and reported to the man in red!

There are many traditions which also tie in with the Christmas season such as the singing of traditional carols,  hanging up mistletoe, eating turkey, baking a fruit cake, munching on mince pies, going to a pantomime – the list goes on and on. Suffice to say that, wherever you may be spending the Christmas season / holidays, here’s hoping a good, safe and happy time will be had by all.